Video games have come a long way since Ralph Baer and company invented a multiplayer, multiprogram system in 1967. The industry is now global and worth more than $100 billion. However, not everyone is a fan of gaming, and the activity has been accused of everything from encouraging aggression to inspiring laziness.

We’ve seen the research studies and heard enough from the politicians, but what do the nearly 65% of American adults who game have to say about it? We surveyed more than 1,000 gamers about one of the effects of gaming: stress. Read on as we explore why some games induce stress and how the right setup can level up your leisure. 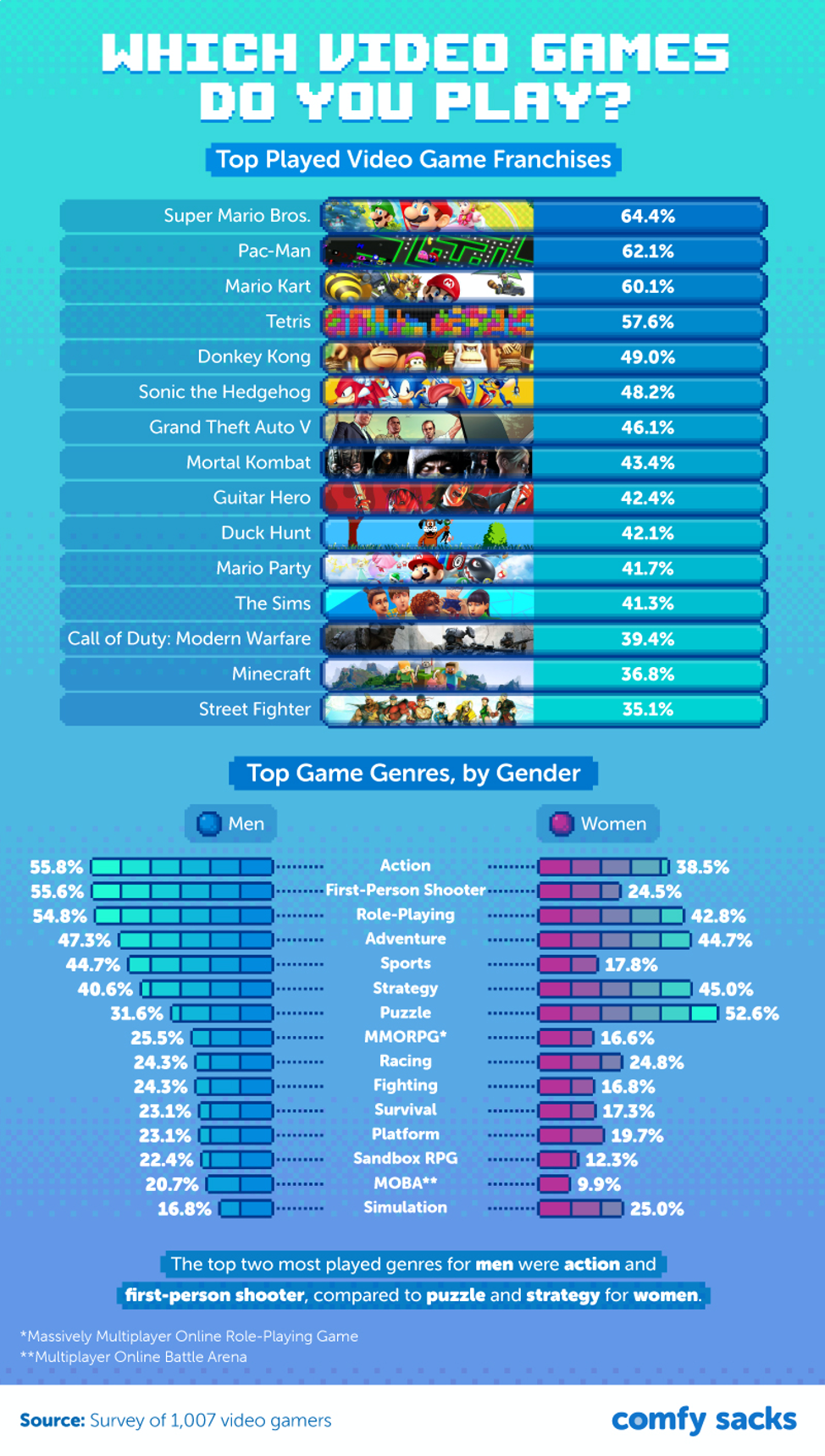 Video games debut monthly, but some of our survey participants’ favorites have been around for decades. Super Mario Bros. was the No. 1 played video game. Although it hit the market more than 33 years ago, 64.4% of people reported playing this Nintendo original.

Pac-Man – also an oldie – was the second most played game franchise (62.1%), followed by Mario Kart, Tetris, and Donkey Kong. Of the 15 game franchises that made the list of favorites, only 35.1% played Street Fighter, making it the least popular.

Although the most popular game, Super Mario Bros., is a platformer, the genre was among the least favored: Merely 23.1% of men and 19.7% of women played platform games. Action was the most preferred genre among men. Nearly 56% of men played action games, compared to 38.5% of women. But puzzle games were most popular among women, with 52.6% enjoying the category. 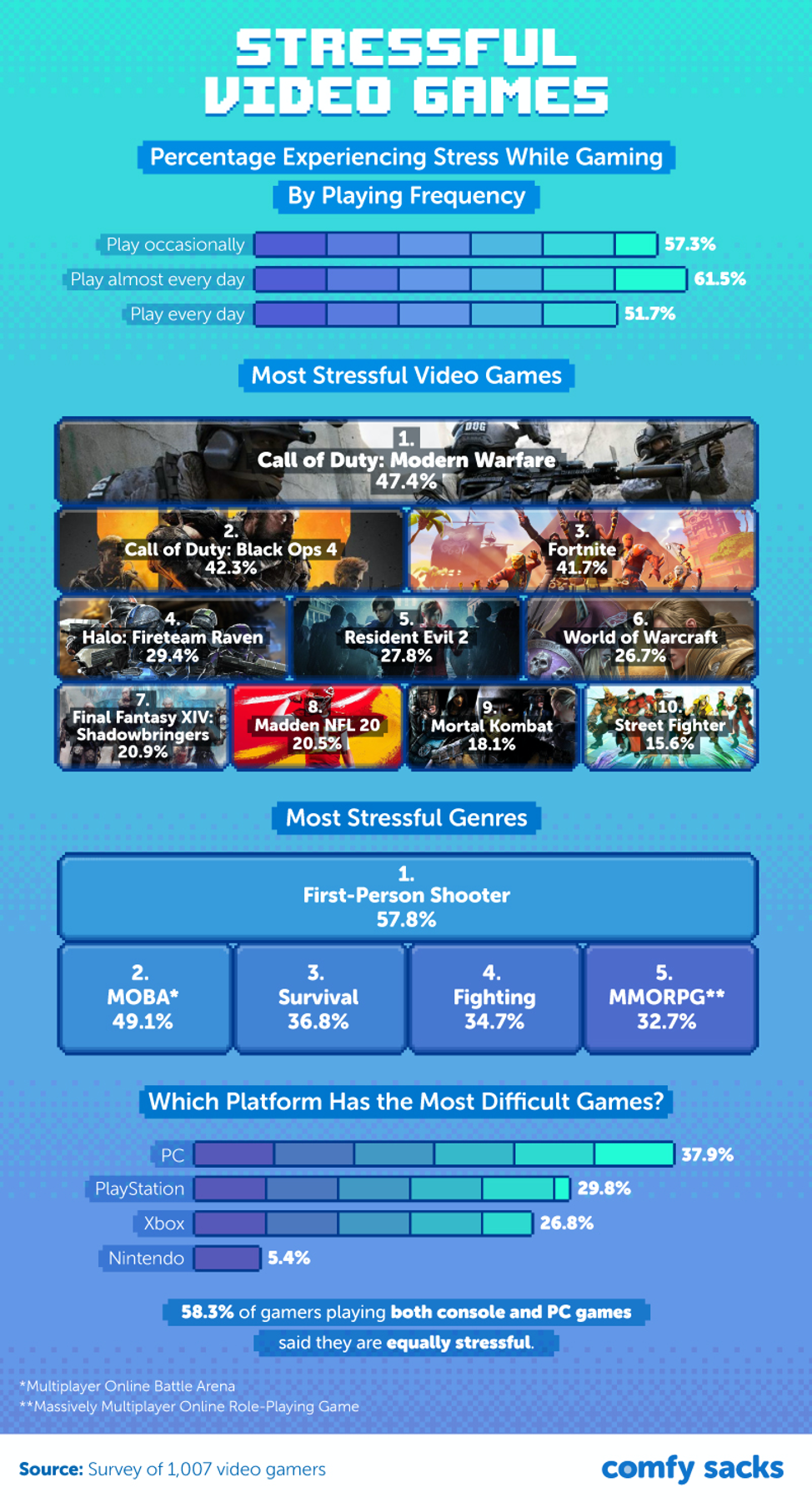 There are video games for every type of occasion: parties, solo adventures, and after-work cooldowns. But not all gaming experiences leave us feeling refreshed; hence the term “rage quit.” You know, when a player becomes so angry while playing that they make an aggressive early exit. So, which games bring people to their boiling point?

For the majority of gamers (57.8%), the first-person shooter genre caused the most stress, followed by multiplayer online battle arena games (MOBA). Call of Duty: Modern Warfare, a first-person shooter multiplayer game, was the most stressful, according to 47.4% of gamers. Another title in the franchise, Call of Duty: Black Ops 4, landed at No. 2 on the list.

Over three-fifths of people who gamed almost every day said they experience stress while gaming, compared to 51.7% of people playing daily. Perhaps those gaming every day have had more practice, which makes the activity more enjoyable. 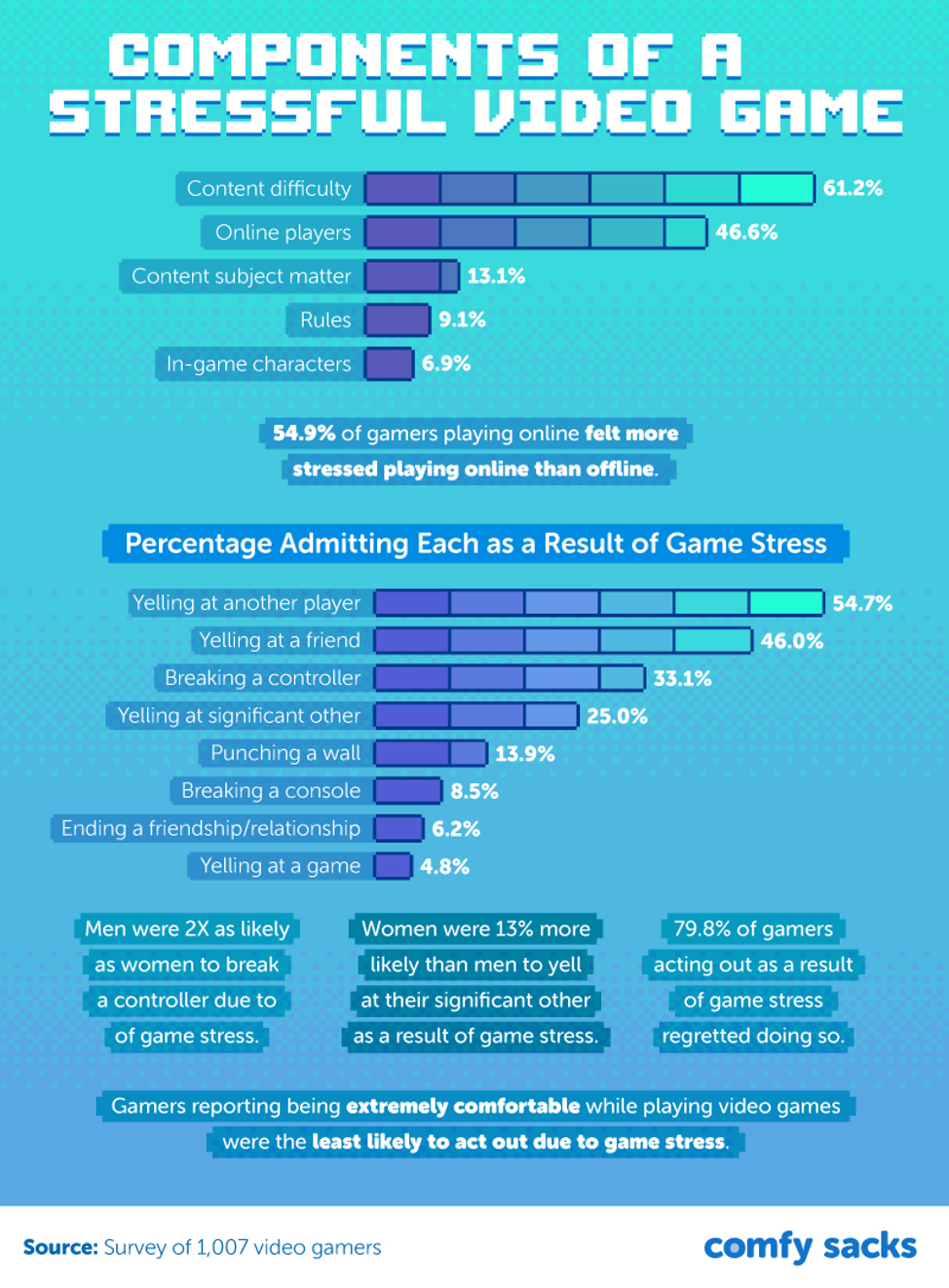 Research suggests that video games can help reduce stress; in other cases, people leave a game feeling aggravated. Of course, rules are what sometimes lead to gaming anxiety, but that was true for less than 10% of gamers in our study. The No. 1 culprit was difficult content. For 61.2% of people, the process of toiling with a level – and likely failing – is what makes video games stressful.

And most people don’t hold that stress in – they release it. Nearly 55% of gamers said they yelled at another player while feeling aggravated, and others yelled at a friend (46%) or significant other (25%). Others took a more physical approach: A third of gamers reported breaking a controller due to game stress, and 13.9% had punched a wall.

For almost 55% of people, playing online was a greater stressor than gaming offline. If you want to relax after a long day, it may not be a great idea to play with other people. Instead, find a comfortable environment and settle in for a solo puzzle or strategy game. 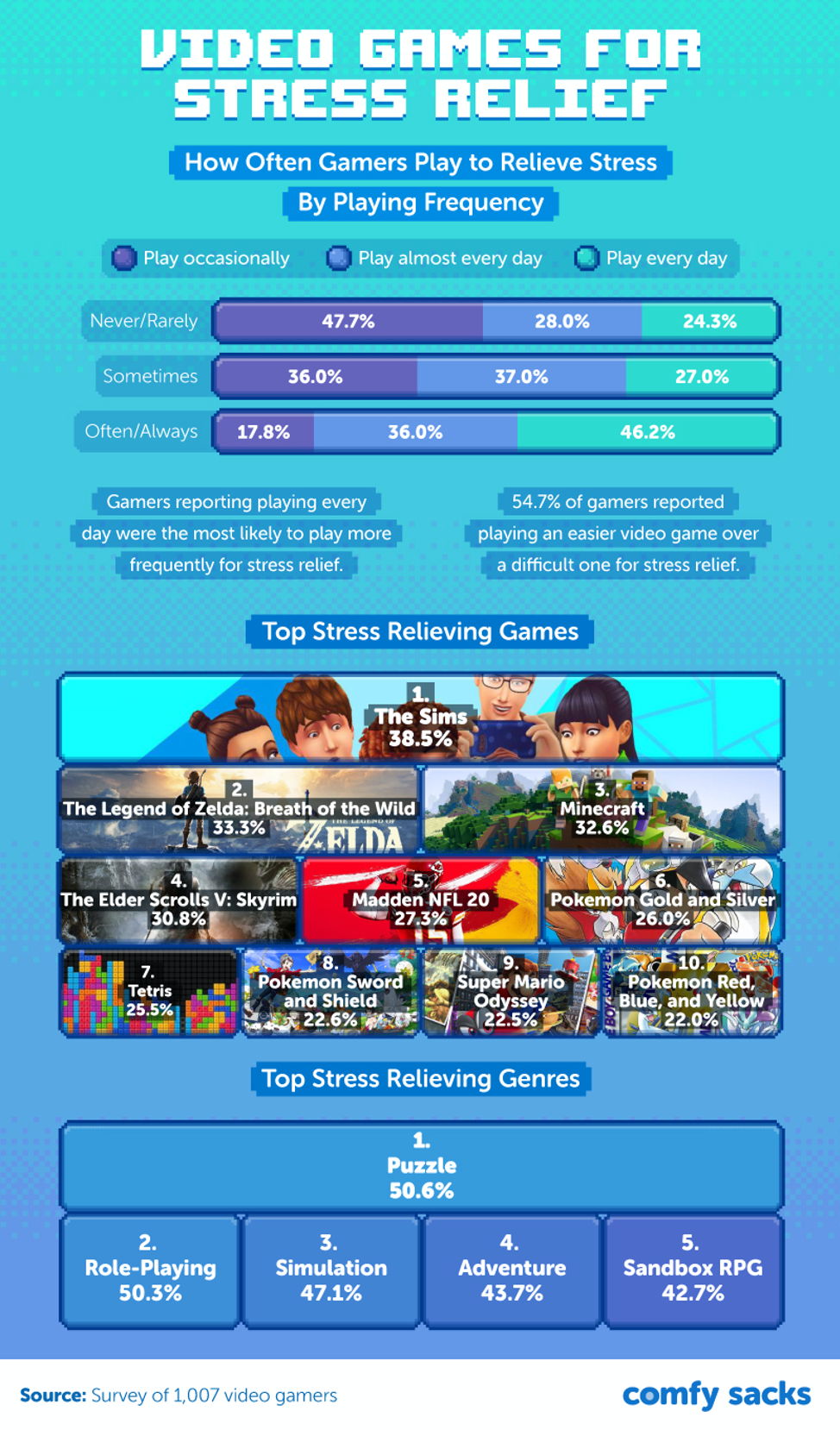 According to participants in our study, puzzles and role-playing games were the best genres for stress relief. But we also noticed an interesting pattern. Of the games people played to relieve stress, the top two (The Sims and The Legend of Zelda: Breath of the Wild) are part of franchises that have been around for a long time.

It seems that when people wanted to relieve stress, they reached back in time. Nearly 55% of gamers also reported switching from a challenging game to an easier one when they wanted to relax. Perhaps, the act of leisurely playing a game is what reduces stress, not gaming for the sake of conquering a new challenge. 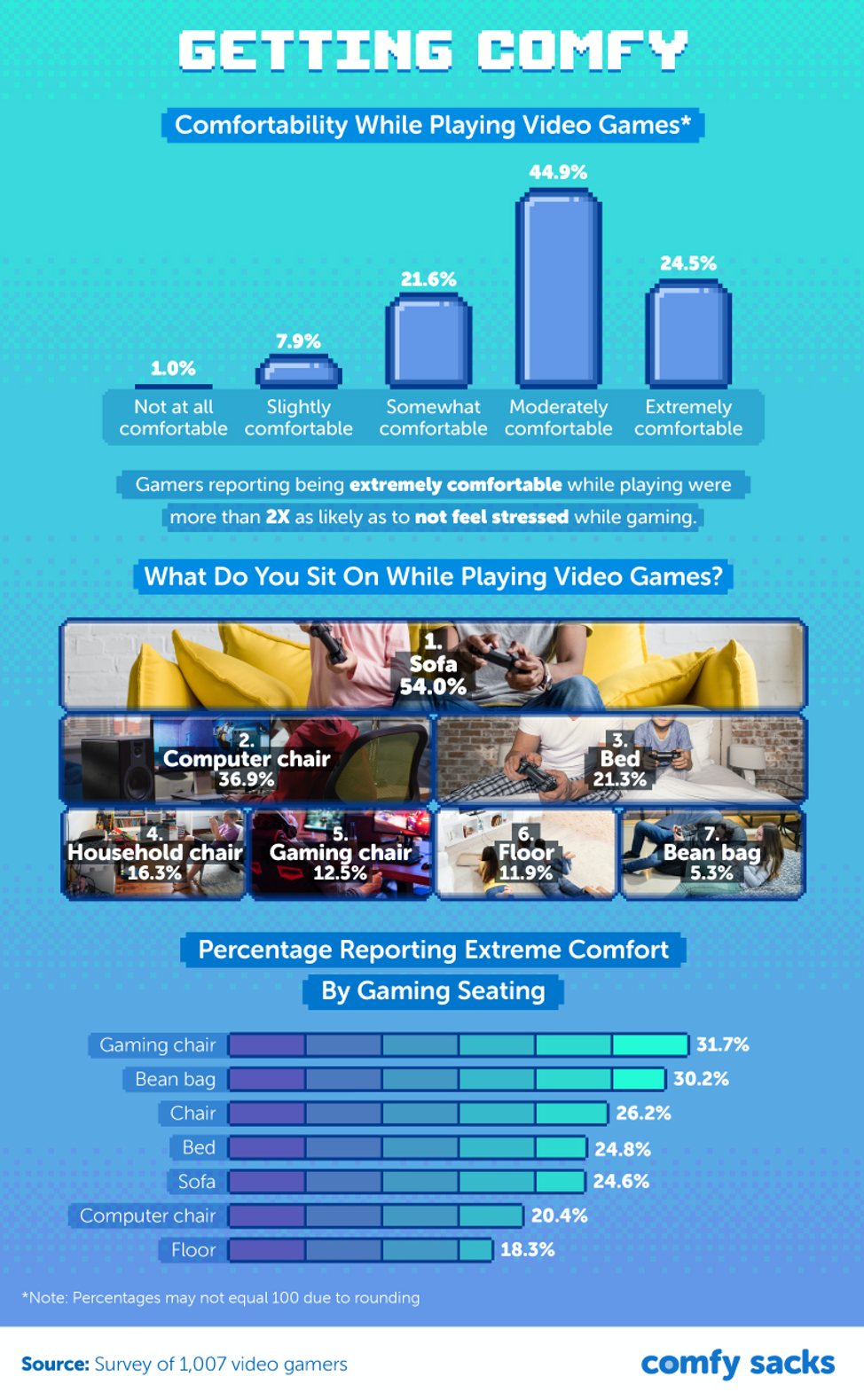 Based on our findings, the type of game someone plays is not the only factor that affects the gaming experience. Comfortability makes a significant difference. Gamers who reported being extremely comfortable while playing were more than twice as likely not to feel stressed when gaming.

However, fewer than 1 in 4 reported being extremely comfortable. The majority of people (44.9%) were moderately comfortable when they played video games. This might be because more than half of gamers sit on a sofa while they play. A small percentage of people even sit on the floor, which couldn’t possibly make for a stress-free experience.

According to gamers who were extremely comfortable while playing, a gaming chair was the best furniture for a stress-relieving experience, followed by a beanbag (30.2%). Unlike sitting on a couch or the floor, a chair designed for gaming can provide the proper ergonomic support for long hours of play. Perhaps, that’s why the gaming chair market is expected to grow in the coming years.

Our research shows that some games do cause stress, but a more comfortable, stress-free gaming experience is possible. And with more comfort comes more enjoyable gameplay.

Gone are the days of feeling your butt go numb while you beat the competition. Visit ComfySacks.com and outfit your home with an ultra-comfortable, durable, and long-lasting beanbag or foam chair to game in. We know our products are the best, but we also value competition, so we’ve got side-by-side comparisons available right on our website. Visit us today and find the best furniture for your gaming experience.

The sample size of gamers who used bean bags while playing video games was only 53 respondents. Because the survey relies on self-reporting, issues such as telescoping and exaggeration may have influenced responses. An attention-check question was included in the survey to help make sure respondents did not answer randomly.

Are you under the impression that gaming is too stressful or challenging? Read and share what we’ve found about having a stress-free gaming experience for any noncommercial use. All we ask is that you link back to this page so that everyone has access to the methodology and complete study.

Select our QuickShip option at checkout to guarantee your order ships SAME DAY if received before 12pm PST (Mon-Fri).


Read More on Our Blog

For the best deals
and free giveaways